Why put a front facing camera on the RIFT when you could create a detachable front facing camera!:
All you need:
1. Oculus Rift
2. HDMI cable
3. HDMI switch (To switch between your PC and your 'RIFT)
4. A 3D camcorder with realtime video output. 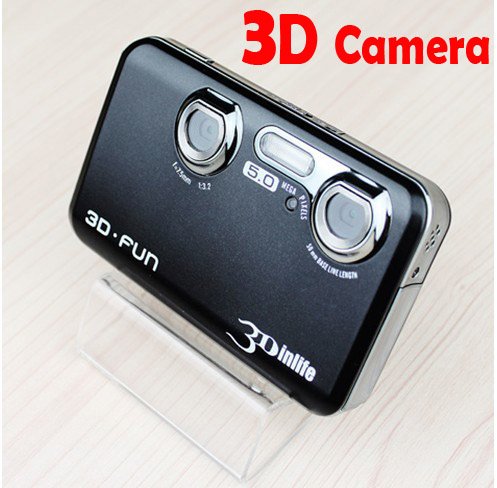 The idea would be to mount this to the front of the rift, (hopefully it outputs side by side HDMI video at the correct aspect ratio but i doubt it!) At any point you could demount the camera from the front of the Rift and I donno, look under your couch or behind your computer or inside your air-ducts, whatever! LOL
Congratulations! You're a backer of Among the Sleep by Krillbite Studio

I have the Fujifilm W2, and it does have an HDMI port. But, from what I can tell, this only allows playback of recorded footage. Not real-time previewing. Would be great if some camera could do real-time, though. Also, it would need to be SBS since the Rift doesn't support HDMI 1.4a. Not sure how hard it would be to DIY something like this.
check my blog - cybereality.com
Top

I expect there will be a lot of DIY efforts to add various forms of pass-thru video to the dev-Rift. I think it's a must have feature on the consumer version.
Top

Mods:
I meant to put this in the Oculus Rift Forum.
If you feel it should be there, please move it, otherwise, ignore.

Congratulations! You're a backer of Among the Sleep by Krillbite Studio

OK, I moved it.
check my blog - cybereality.com
Top

Huh, and here I was, coming to start a post about possible cameras for use with the rift. hehe.

I really kinda like this idea, would probably mount it in one of the top corners of the room I was using the rift in. Or get one of those wireless HDMI links and strap the camera to one of the cats

What I was going to as the Fora is what their ideas are on taking photos with the proper FOV, optical pre distortion etc for the Rift. My knowledge of opticis is basically limited to physics and basic photography, but I was hoping to combine them (and some broken old Canon lenses) to try and come up with a mirror based attachment for my Canon 600D that can take a picture to be displayed on the Rift. Unless the optics and FOV change dramatically, the DSLR resolution (5184px x 3456px on my entry-ish level canon) should exceed the commercial Rift too.

I would imagine some sort of filter, combined with the right focal lengths could take a convincing shot. Off to go see what I can budget from ebay

There are just so many places where a photo just doesn't cut it. I know it loses the head tracking, but you can kind of give a "this is what I saw" image. Plus, even the 600D does 1080p video, so...rift video too I guess?

A quick look shows a couple of low quality SBS lenses out on the market. Guess I'll start sketching
Top

Additives wrote:There are just so many places where a photo just doesn't cut it. I know it loses the head tracking, but you can kind of give a "this is what I saw" image. Plus, even the 600D does 1080p video, so...rift video too I guess?

Photos NEVER cut it. You just can't express spatial volume properly. I would love to have the ability to take a wide photo and properly display it on a high-res Rift.
Top

brantlew wrote:I expect there will be a lot of DIY efforts to add various forms of pass-thru video to the dev-Rift. I think it's a must have feature on the consumer version.

Professor Steve Mann, University of Toronto, has written extensively about using computer augmentation of pass through video for his EyeTap device. He has a number of algorithms and a long history of using these devices in the real world.
Top

I did a quick test putting a PS3 Eye on my DIY Rift last weekend. The only problem was that it was noticeable how much further away from your face it was compared to your eyes. My HMD is a bit bigger than the Rift which doesn't help.
Top

cybereality wrote:I have the Fujifilm W2, and it does have an HDMI port. But, from what I can tell, this only allows playback of recorded footage. Not real-time previewing

As far as I remember, the W3 can do it, I'll have to try it when I get home

I highly doubt you will find a consumer 3D camera with an output latency low enough to make this possible.
Top

brantlew wrote:I expect there will be a lot of DIY efforts to add various forms of pass-thru video to the dev-Rift. I think it's a must have feature on the consumer version.

Yes... I read Michael Abrash's second post on the future of AR/VR the other day... and he was saying pretty much the same thing (i.e. for VR to really broaden its appeal, it's going to have to include basic usability features including visual passthrough allowing gamers to see and interact things in their actual environments at the drop of a hat).

Technology wise, we've pretty much got it already... smartphone components are again, suitable for a basic pass through, which would help enhance the usability of the tech significantly.

The question is simply one of cost... I think $100 on top would be exceedingly reasonable, given the choice between the two (one with and without, plus/minus cost diff) I'd pick up the more expensive, but more usable one in a heartbeat.

In terms of component costs, most smartphone teardowns have their cameras priced in the region of $10-$20, so even 2 of these devices should be pretty cheap, making it probable that the cost differential of such an addition is well below the $100 mark.

With that been said, video passthrough is going to make the device more versatile, but it's not going to make it a full fledged AR device. I mean, it'll have portability issues for starters.

But it'll be more than sufficient to improve usability and even sufficient for AR experimentation. And I don't doubt for a moment that some enterprising enthusaist (especially on this forum) is going to backtop it and bring it out in the real world to have a good play around with.

Hell, I'd expect that someone on this forum is going to do something like that with the developer rift, simply by attaching some other form of camera onto the Rift. And then they'll tell us about how it's an exciting but somewhat awkward experience.
Top

I think a camera could easily be added for less than $25 to the total cost of the device. It doesn't need to be high resolution or 3D. Oculus has enough on their plate with 6DOF tracking R&D to get too involved with AR at this point. I think a simple 2D pass-thru navigation cam at 60FPS that you could switch on programatically and with a button on the side would be sufficient for usability and safety issues. And since it seems they are researching optical flow methods for head tracking, this would nearly be a free feature. They would only need to add the onboard processing to warp the camera image for display.
Top
Post Reply
13 posts • Page 1 of 1

AcidTech by ST Software Updated for phpBB3.3 by Ian Bradley